The main causes of threat of the Saker falcon in Croatia are poaching, a lack of suitable habitats and, likely, the use of chemical substances in pest protection in agriculture. Even though the Saker falcon is protected by law, like all other birds of prey in Croatia, this protection is very difficult to enforce. Many cases of poisoning birds of prey are known, and it is virtually impossible to determine who is responsible and whether the poisoning was accidental or intentional. Furthermore, many birds of prey are killed by unconscientiously hunters who view them as “pests” or competitors. Research in other countries has shown that some birds are also killed on the electrical wires. Such cases are common in poorly constructed power transmission lines, typically low-power lines where the distance between lines is small and the isolators are short. Illegal trade is also a great danger for the Saker falcon.
During the implementation of this project, it was observed that theft of the young falcons is also a problem. For that reason, the exact locations of individual nests are not given. 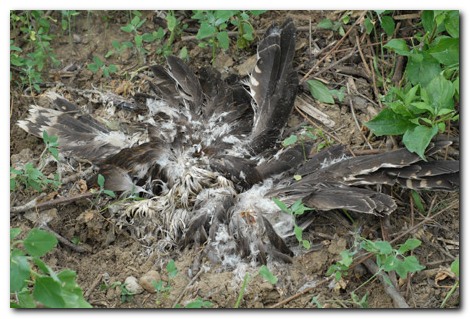 The southwestern border of the distribution range of the Saker falcon covers the eastern part of Croatia, where this bird was recorded back in the 19th century. Like many of the edge areas, eastern Croatia also represents a sensitive area in which extinction of this species could easily occur. In order to reduce the threat of extinction of this species in Croatia, necessary measures must be taken to allow its survival in this territory. It is important to remove threats, such as killing, poisoning and capturing of birds. Permanent cooperation should be established with HEP and artificial nests installed, making it less likely for the young to fall out, thereby increasing nesting success. This method was used in Hungary and had excellent results, and the highest growth of the number of pairs in Europe was recorded. Furthermore, it is very important that workshops be organised in order to popularise this species and its importance, and to alter the perception of humans, who are the greatest threat for this species. Better cooperation and information exchange should be established with individuals and organisations carrying out similar research in neighbouring countries.